Look to your left and walk 5m. Look to your right and walk until you reach the wall. Climb the ladder and touch the roof. As a Spry concept you have just worked with your first vectors.

It helps to understand what a vector is and how it is used in Spry. A vector has 3 basic properties: a) a starting point, b) direction and c) magnitude (distance). In Spry, the starting point is generated from the step above which is why every rule requires the first step to be a point. The direction is controlled by the Vector Type (Bearing & Grade, Coordinates and Towards Point) and in this section we’ll only be using Bearing & Grade (the others will be addressed later). The final property is the intersection with something else which is where we’re going to focus in this section.

There are six kinds of intersections, Distance (fixed length “walk 5m”), Z Level (Roof/Floor “touch the roof”), Line (Point & Vector),Line (Two Points), Polyline and Plane (all four are Walls “walk until you reach the wall”).  You can also apply conditions or limits to your vectors, such as “travel this way, but only if you are below 300m”. Applying these concepts is addressed in the Practical section below.

How “Add to Profile” works

If every step in this example is added to the profile, you will then see those working points overwritten by a haul profile.

Now if you take step 2 and remove it from the profile, what you’ll see is that points 1 and 3 are connected by a haul profile but you can see the working steps as well.

Another way of thinking of this is that once your working steps are generated, every step is now a point in space. Each step that is added to the profile is like a game of connect-the-dots. One final note is that if you can’t see your working points, they may be hidden by your solids!

To summarise, all steps in a profile can be considered to be working steps that you can use to create your haul profiles but are not used by a truck until you “Add to Profile”. When you add steps to your profile you “connect-the-dots” between them and generate your final haul profile that Spry can simulate.

Bearing & Grade Vectors use the step before and you can set both properties using the … button and drawing on your Animation Preview. Generally make sure your Snap option is Snap to Segment or Snap to Point on Segment. 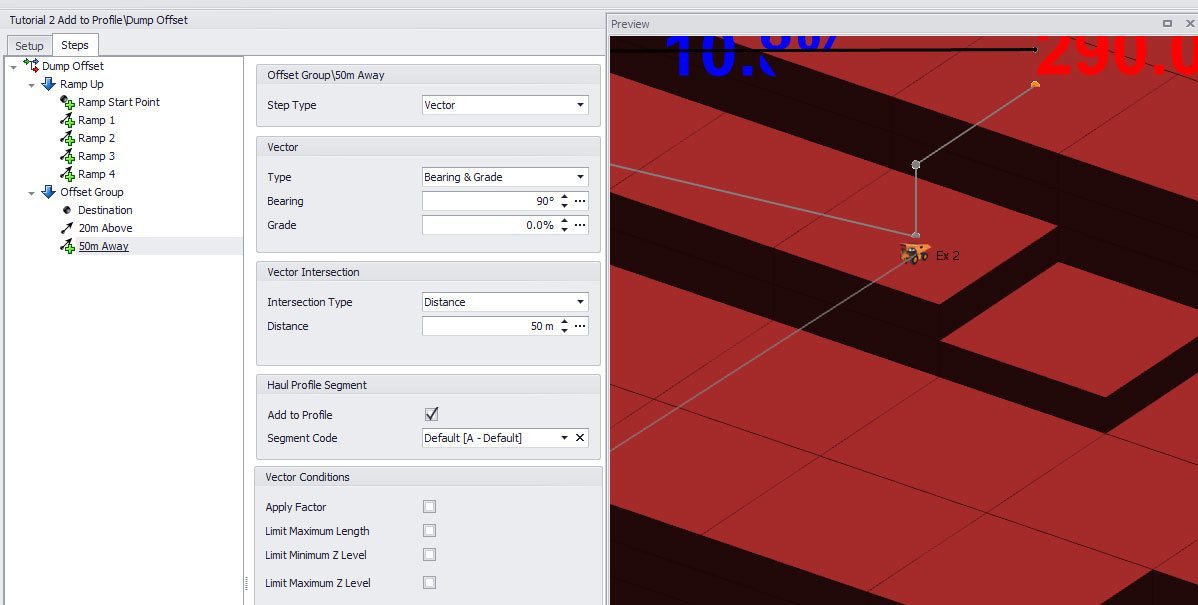 When you’ve got a vector that is travelling through the Z plane (up or down) you can intersect it with a Z level (stop at a roof or floor). For a dynamic ramp we might ramp down  and intersect with the Z level of our Source Node. This also works in reverse for climbing a dump ramp. 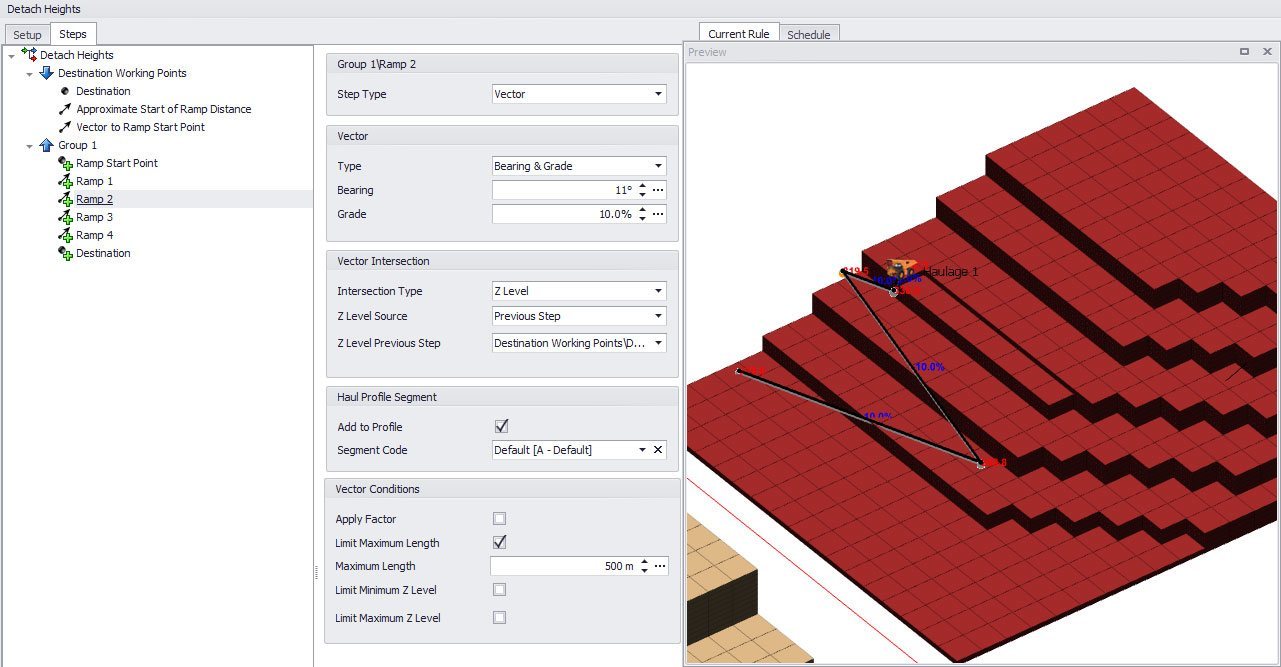 Note: If your vector has a 0% grade, Spry will show an error message as you can’t intersect with a Z level if your Z level isn’t changing.

Vectors become more interesting with our next two intersections. The first, a “Two Points” intersection, creates a line from two points (that can be centroids, previous steps or entered manually). When your vector intersects with this line, it ends.

You get two choices with what the Z Level Source of your final vector position is. The default is “Line” which overrides the Grade you may have set earlier and takes the Z level from the line you drew instead. A common use of this is where you know the line of the top of your ramp out of pit is going, but the topography is on an incline or decline. By setting a “Line” Z Source type you can set a top of ramp consistent with your topography.

The second Z Level Source you can set for this intersection type is “Vector”. That means no matter what Z Level your line is on, your vector will intersect with the Z level that is consistent with the Grade you set earlier. A common use of this is heading towards the edge of a pit which is deepening over time. See a comparison of the two Z Level Sources below.

Similar to “Two Points”, this vector intersection type generates a line to intersect with. However only one point is required, the line is generated instead from a bearing and grade. For example this can be particularly useful for a road whose length varies on the destination node. In the screenshot below by creating a point and vector line intersection at a 90 degree angle you can see the distance always lines up with the dump face.

When more than two points are required, you can use an unlimited number of Entered Points to create a Polyline. This can be useful for a Step which is targeting an inconsistent terrain line like in the example below where five different Output Schedule Steps are shown for effect. 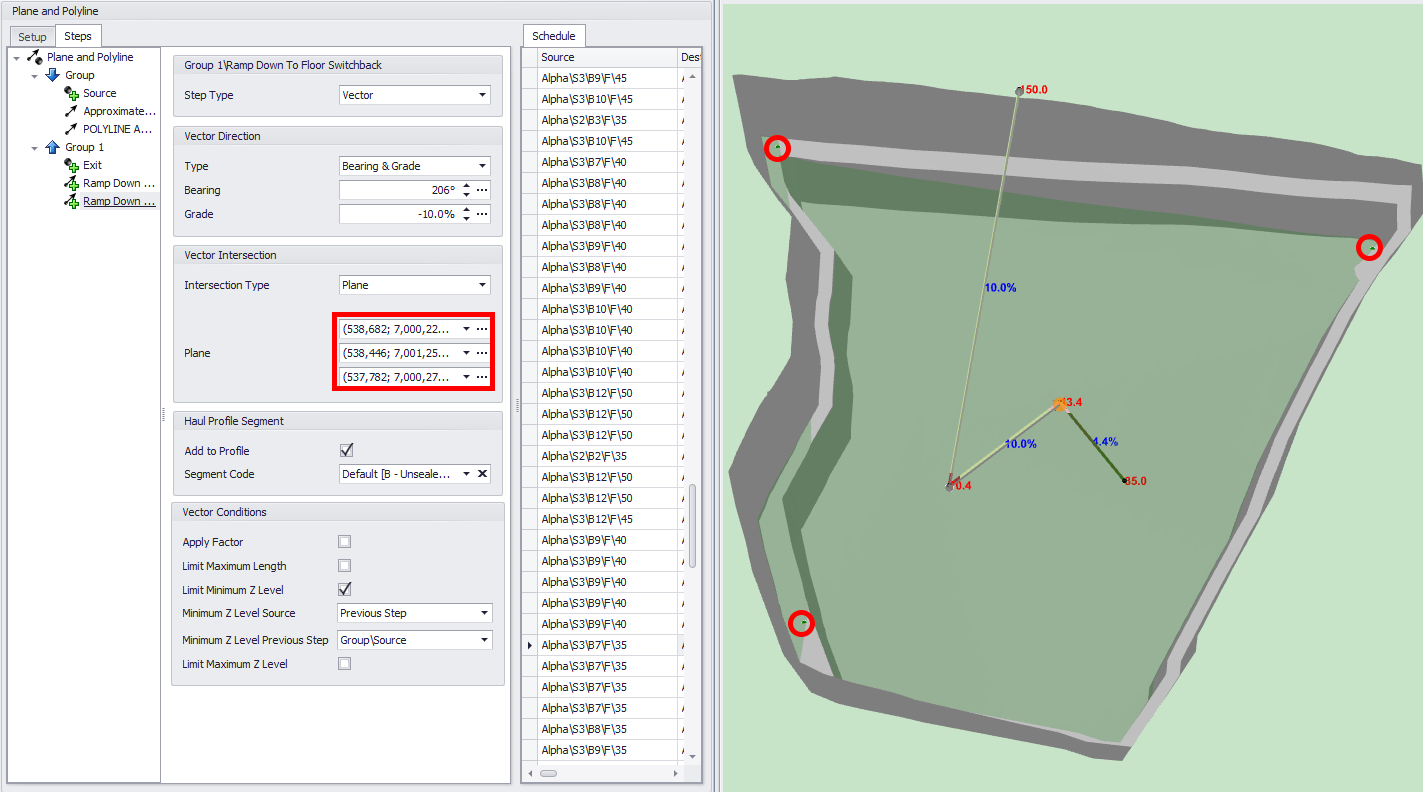 What happens if my Vector DOESN’T intersect?

A vector that doesn’t intersect essentially becomes a null vector (it goes nowhere and duplicates the point from the step before). This is actually really useful! You can get creative with what are essentially conditional vectors such as “only move to the right if further left than point X” or “ramp EITHER up or down to a Z level” by stacking vectors on top of each other (see examples in the tutorial file). In the Z Level intersection example above we have multiple ramps that intersect with the Z Level of the dump centroid. However, once the Z Level has been intersected, no more points are generated.

It’s not the first Vector Condition available but it’s probably the most common and the easiest to understand. A Maximum Length limit will do exactly that! In the example file there is a ramp which climbs towards Z Level but is limited to 500m. Turn off the Vector Condition to see the result. This condition is most commonly used in ramping up or down an area of limited length.

The Minimum and Maximum Z Level conditions behave almost the same way as a Z Level intersection. For the major difference, think of the Minimum Z Level as a floor and the Maximum Z level as a roof. You cannot start above your roof or below your floor, if you do so you create a null vector (0m distance) for the whole step. So if your Maximum Z Level is 300m and your vector starts at 305m and grades down towards 300m, instead of intersecting with the 300m Z Level you will have a null vector.