Note: This article is a work in progress!

The appropriate method to import/update data in a Table depends on the software used to generate reserves. No matter the method, create your Levels and Fields (through the Setup menus) before using the Import menus described below.

In addition, any time the Import Data menu option is used, you should ensure that each line of your CSV/XLS/XLSX file has a unique identifier (usually a combination of several columns such as Pit, Strip, Block, Seam and Bench) which is how Spry identifies where the other data (qualities and volumes etc.) will be stored in the Table. If nodes are unique based on the Process, you may want to import them as separate sheets in an XLS/XLSX.

As of Vulcan 10, the suggested method to export data from Vulcan is to use the Open Pit Solids menu. For more information about how to use these tools visit Maptek or search for Split Pit Solids.

Once a CSV/XLS/XLSX is created that references solids and required parameters use the Import ► Data menu option.

The suggested method for importing Deswik reserves is to import the VCDL or DCF file directly using the Import ► Solids ► From Deswik Database menu option which is a single pass that imports both Solids and related attributes.

The Minescape reserves importing process has two components and the second has two different options:

The Minex reserves importing process has two components and the second has two different options: 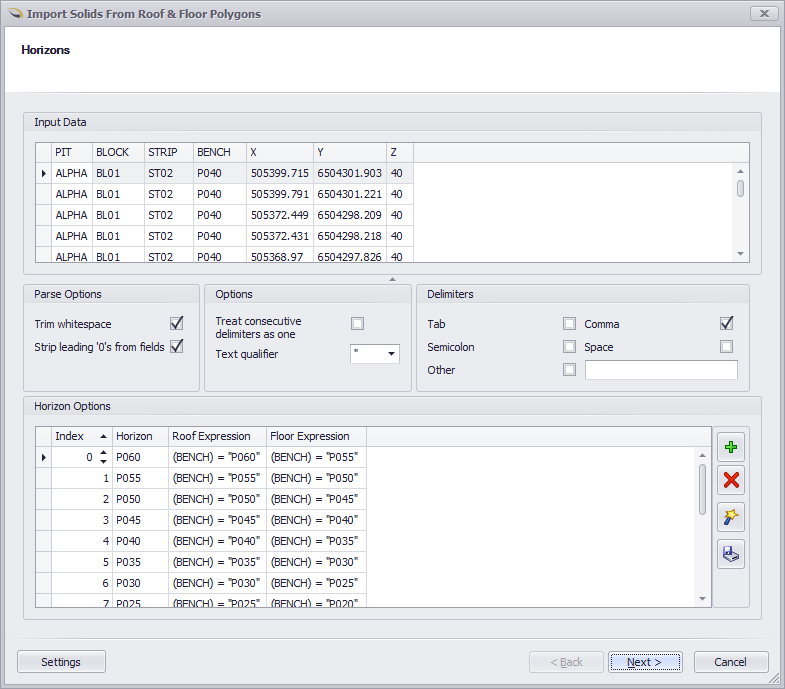 If you have only a Roof or Floor file (as opposed to both) you may need a set of Horizons similar to the screenshot above, otherwise a single entry with a way to distinguish between roof and floor is sufficient.