Home /Knowledge Base /Spry: In Depth /In Depth #4: Introduction to the Expression Editor

The Expression Editor is used in almost every element of Spry to offer intermediate and advanced customisation. Similar to Excel they offer many functions that provide a significant amount of power without scripting. Clicking on each Function, Constant or Variable provides a description of the use of it and double-clicking will enter it into the Expression.

To begin with, it’s important to understand that different Expressions “return” different types of results: Values (numbers), Text, Booleans(True/False) and DateTimes. The simplest Expressions for each type would be:

One of the most useful tools in the Expression Editor is the ability to search the Functions and Variables available using the search bar. If you know roughly what you require start typing in the search and the results will narrow. 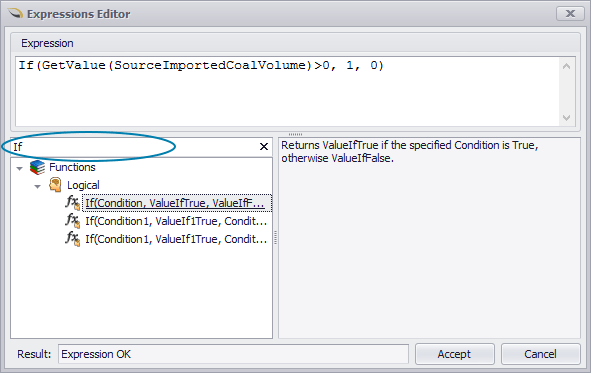 Reading Data from a Table

The Get() Functions (GetValue, GetFormat, GetText, GetCoordinate) return Data from a Table using a Field as an input. These Functions are limited in that they only reference contextual Tables (Source, Destination and Calendar on a Scenario for example) and to reference other types of Tables you would use the TableValue() and TableText() Functions instead. GetValue() returns a Value so if being used on a Scenario then

TableValue() and TableText() follow a similar pattern except that they require specific reference not only to the Field but also the Table and Node as well.

Logic Functions (If, Between, In)

Similar to their Excel counterparts, If(), Between() and In() are all useful in Expressions. Expanding on the example earlier

would return a “Large” or “Small” Text string.

You may notice that in this example there is a line break between the True and False options. Line breaks have no effect in Expressions except to make them easier to read.

You might have a piece of Equipment named Coal, but you might also have a Process called Coal (and a Bench named Coal!). You can’t just use Blasting as the name for each as they have to be unique, so Spry places their location before the name. The piece of Equipment called Coal has the Code Name EquipmentCoal (no spaces) and the Process is called ProcessCoal.

There are two distinct ways to reference Positions, Equipment and Processes in Expressions. Firstly, the terms themselves are Variables (Equipment, Process and various Levels such as Strip or SourceStrip depending on context). So the following function would return the name of those particular Variables at the time the Expression is evaluated:

There are times when particular results need to be converted into others (Text that needs to be a Value as an example). In the Process example above the Text() Function is used to convert a Process into Text. An extended example, using several Functions we can take the Strip number out of a string (which comes out as Text by default) and convert it to a number like this:

Operators (And, Or, Greater Than, Less Than, Equals, Not Equals)

Certain Functions and Variables are only present in particular parts of Spry which are detailed below. This list is by no means exhaustive so it’s always good to check the relevant documentation for specific examples.

These Functions extend the GetValue and GetText to look at records other than the current node (for which the code name is CurrentNode). A “Sibling” is a Node that is at the same Level, a “Parent” is a Node (or several) above and a “Child” is a Node below. “Previous refers to an earlier Index and Next refers to a later one. There are several key points to note when using these Node Functions. 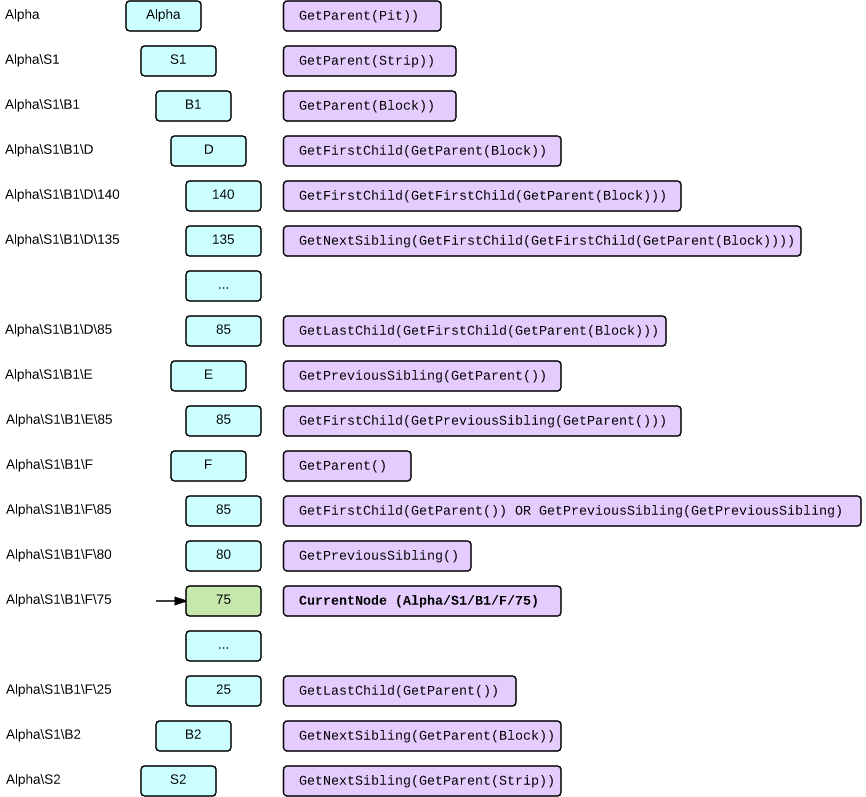 Because Table Plots often rely on groups of Leaves to provided aggregated results (e.g. Strip Ratios are a combination of all Waste divided by all Coal in a vertical group of Leaves) GetValue type Functions needs to be wrapped in a Nodes Function to correctly aggregate the results. This is because there will be examples where you want NodesSum(e.g Strip Ratios), NodesWeightAvg(e.g Quality Plots) and NodesMin/Max(e.g. Period Progress Plots)

When creating Custom Fields, it’s important that Value Custom Fields that are Aggregated by Sum are also multiplied by the SourcePercentageCompleted Variable to ensure they are not over-represented.